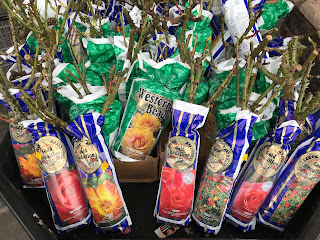 It's been several years since I purchased a bare root rose. Most of the roses in my garden were given to me as a gift, won on the raffle table and were already potted up or were cuttings that I rooted and placed in my garden.

This year, however, with the creation of this blog, I thought it would be helpful to review some best practices with bundled up bare root roses.

1. Purchase your bare root roses as soon as they are on display.

2. Look for Grade #1 which usually means three strong canes and comes at a higher price. If you purchase the lesser Grade #1.5, make sure you have at least two strong canes on opposite sides of the graft. Watch out for broken canes. That can happen when shoppers are rifling through the bin. 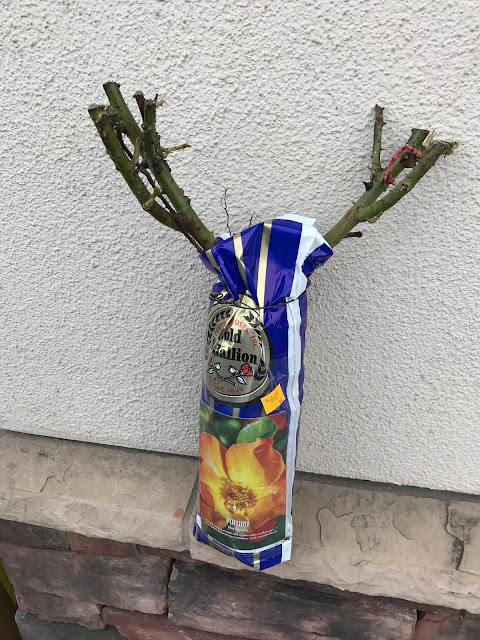 3. Expect to pay more for the patented roses which will be the latest introductions. National chain stores usually carry some patented roses and many older varieties as they can offer the ones that have been around for awhile at a cheaper price.

They can also count on gardeners to have heard some popular variety names and be inclined to choose something they've heard of rather than experiment with something they don't know. This year in the bins I've spotted Mister Lincoln (no), Camelot (no), Oklahoma (maybe), Olympiad (yes), Sterling Silver (hell no), Peace (maybe), Pascali (yes), Double Delight (yes), Miss All-American Beauty (definitely), Oregold (no), Playboy (yes) and Queen Elizabeth (no). I also spotted some climbing roses in the bins: Joseph's Coat (yes), Don Juan (no), Piñata (no), and Golden Showers (yes). Climbing Cécile Brunner, too, is very large, healthy and floriferous in the spring with an occasional flower during the season.

4. These chain stores purchase roses at their corporate headquarters in enormous lots without any reference as to how well they will do on the Central Coast of California. Some will do well, others won't perform as you might wish and are susceptible to many of our fungal diseases or have too many petals and a shape that needs night-time heat to open properly.

5. Discount stores may also offer roses for sale. Like most of the merchandise offered at these businesses, they are overstock items, often from lesser quality sources. No matter, I decided to go through one of their bins and pick out one more rose.

The rose I purchased - Blue Girl - came from the fields around Tyler, Texas which is a different climate than ours so I expect some early vigor and will watch to see if during the summer it can adapt and grow.

(I bought Blue Girl as it grows well in the Monterey Bay Rose Society's display garden, located on Lake Avenue, east of Watsonville on the Santa Cruz County Fairgrounds. It's lavender and I don't have an example currently of that color in my yard. At $5.99, it would be worth the risk of buying a rose with a mosaic virus. I'll know as soon as the leaves start growing and displaying the virus. It doesn't spread from bush to bush and would have been probably introduced from the tainted rootstock.) 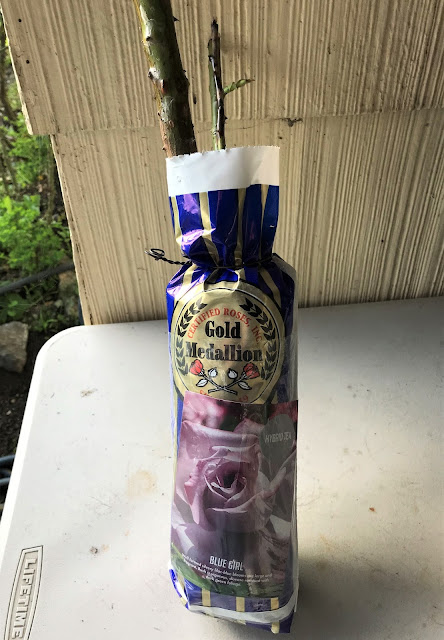 6. Unwrap the bundled rose in a far corner of the garden. Discard the paper wrapping and allow the sawdust to fall in the garden or your recycle bin.

7. Inspect the rose carefully for broken or damaged roots. It's likely the rose will have produced a few new roots while in storage. They will be pale white. If you find a broken root, prune it off about a quarter inch above the break. 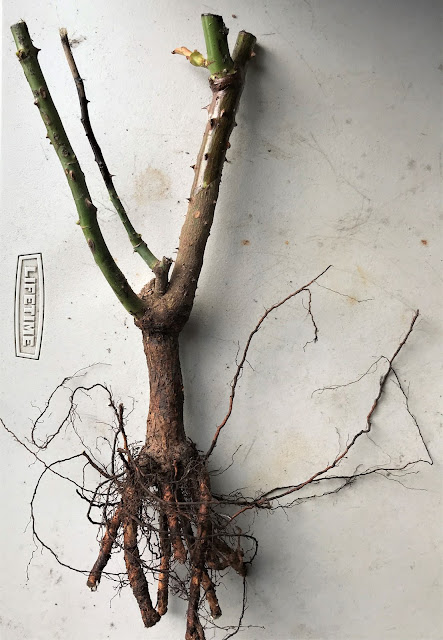 8. Plunge the rose into three or four gallons of water to which you've added a tablespoon of bleach. The rose was probably harvested in October, processed and wrapped and sent to a cooler set at exactly 33 degrees. You don't know how long it sat on the delivery truck or how long it was in the back room at the store and in some cases how long it's been out in the sun at the store's front door. It will definitely be in need of a drink. The bleach is a safeguard against any bacteria, fungus or insect eggs which might be on the plant from Texas.

9. Allow one or two days for re-hydration. When you're ready, you can either pot the rose up in pristine soil or plant it directly in your garden. I now opt for a 15-gallon black pot. Mostly due to the fact that I'm not sure where in the garden I want to put a new rose or how healthy the plant might be.

10. Dust the roots with some rooting hormone before you bury them. I've found that this helps the rose to establish more roots faster.

11. If the bud eyes have already sprouted and are starting to produce leaves, push off multiple sprouts from one location always leaving the strongest one. Choose those sprouts coming from the top part of the cane and facing away from the center of the plant.

12. Spread the roots out as much as you can and place soil about an inch above the bud union (the point where the rose you bought was grafted onto the rootstock). Fresh soil usually settles a bit and the soil line will come to rest right at the bud union in a matter of weeks.

13. Do all this now while the days are still short and the nights are cold so there won't be too much stress on the plant.

14. Give the newly planted rose about a gallon of water. Don't drown it. It doesn't have a strong root system yet and you don't want to have what roots it does have to sit in water.

Posted by Joe Truskot at 2:18 PM No comments:

Rose Pruning is Fun ... And Necessary

Rose Pruning is fun ... and necessary 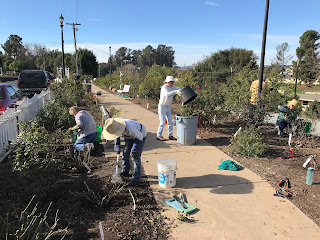 Just look at the great group effort to prune the 125 hybrid teas, floribundas, and climbers at the Monterey Bay Rose Society's display garden at the Santa Cruz County Fairgrounds outside of Watsonville on Sunday.

The garden will be finished on Wednesday and ready for new top dressing. It's much easier to add soil amendments and mulch once the bushes have been reduced in size.

My home garden is about half done and I hope to return to it later today. But during the pruning, I was reminded again of the importance of opening up the center of bush, getting rid of all canes which cross over the center, and pruning to a healthy outside bud eye.

During my last time pruning, I found the following cane and thought you'd benefit from some advice. Occasionally you will find a damaged cane on one of your bushes which somehow got scaped during the summer.

It's best to prune off any canes that have been injured like this as they are only supplying the upper part of the cane with half the nutrition needed. As the growth below the damaged area was spindly, I cut even further down the cane as the photo indicates. 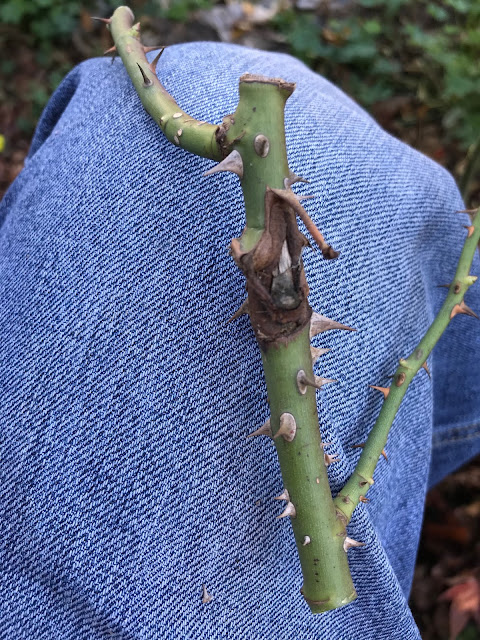 Posted by Joe Truskot at 9:56 AM No comments:


Join members of the Monterey Bay Rose Society for an upclose and personal lesson on how to prune rose bushes. The event takes place Saturday and Sunday, January 13 and 14 at the Santa Cruz County Fairgrounds in Watsonville. Enter through the Horse Show Gate across the street from Sierra Azul Nursery. Drive to the end and look to your left.

The program includes a step-by-step demonstration of how to prune, what to prune and how much to prune. It also covers a lesson on the appropriate equipment and how to keep your pruning shears sharp.

The advantage of this demonstration is that all participants are encouraged to put on their gloves and sharpen their blades and try it out under the supervision of an experienced consulting rosarian.