Bindweed in a Rose Garden


Now that I’ve taken measures to block weed seeds from sprouting in my rose garden, I must contend with those weeds that are particularly troublesome and aren’t stopped by my layer of cardboard, layer of heavy landscape cloth, and four inches of tree-bark mulch. These nasty plants have established themselves throughout the garden, mostly under and around the base of my roses.

A big topic at our last Rose Society meeting was bindweed. This noxious weed is at its height at the moment.

Often referred to as “field bindweed,” I’ve seen this prevalent pest in every garden I’ve ever visited in California. Its other common names are Creeping Jenny and Devil’s Guts. Its Latin name Convolvulus arvensis shows that it is part of the morning glory family of vines. Wild morning glory is another name for it but unlike the popular annual which can be a garden showstopper in the right place, bindweed never seems to be in the right place. Its roots are persistent and are usually in the top two feet of soil. But I have found them coming from much further down. 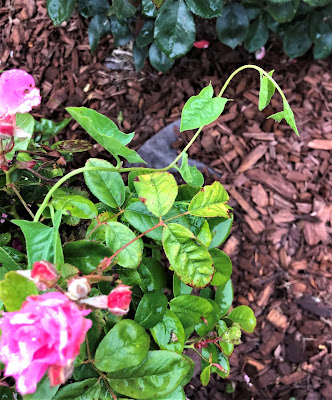 Bindweed grows well in both rich fertile soil and nutrient poor dirt. It is drought tolerant and will rest in arid ground until an errant hose waters it. Then it springs to life.

Describing bindweed as aggressive doesn’t emphasize enough the rapid twirling behavior of this weed. Within hours – with the correct nutrients and sunlight – bindweed’s tentacles will reach out and grab plants such as roses and tangle them up as it tries to reach the very top of the bush. This strangulation particularly of roses will prevent air from circulating in the center of the bush leading to fungal diseases. It will also distort into bent and useless shapes the much softer new rose canes and flowering stalks which want to grow straight up. Who wants a rose bush with flowers growing sideways or toward the ground?

By the way, bindweed twirls around its host’s stem in a counter-clockwise direction when reaching for the sun. This is true. Look for yourself. When left without a host, bindweed will create a thick mat on the surface of the soil.

Bindweed is a European and Asian native plant which has established itself throughout the globe. Its growth rate slows down after mid-September as the days shorten. It’s above ground growth will be killed by frost.  It doesn’t grow in waterlogged, boggy areas – but then, what garden plant does?

The leaves are arrowhead-shaped and appear all along the vine. Its flowers are trumpet shaped, white or pink. Its seeds are contained in a capsule which is 5-10 mm long, bearing 1 to 4 seeds, each about 3-4 mm long. Seeds can persist in the soil for up to 50 years according the State of Utah’s Ag Department. The number of seed per plant varies between 25 and 300. Birds do eat the seeds and spread them around. When an individual seed sprouts, it sends down a tap root which then sends out horizontal roots and from them, smaller feeder roots.

If you dig out bindweed, make certain you get as much of the root as possible. A two-inch length of root remaining in the dirt will re-sprout and establish itself as a new plant. 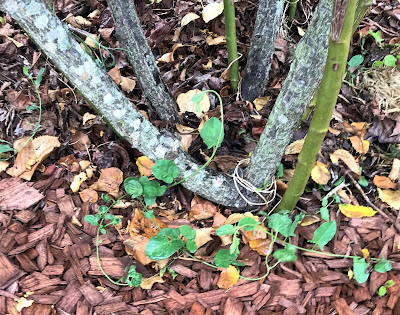 I have known rosarians who allowed the bindweed in their rose beds to develop healthy green leaves and then paint on (not spray) RoundUp. A bindweed leaf has a particularly rough surface which many agriculturalists have said resists a spray of herbicide. In addition, well established bind weed has such a vast system of underground roots, the total effectiveness of herbicides is questionable.

The best control is digging as much of it up as possible whenever and where ever you see it. It’s a particular challenge with roses as its roots are often intermingled with those of the rose.

Don’t ever allow it to flower. Simply pulling the top of the vine off is easy to do and somewhat helpful, but the remaining root often bifurcates and you end up with multiple vines coming out of the tap root within a week or two.

By persistence, you will eventually deplete its roots of the nutrients it has stored.

Posted by Joe Truskot at 9:29 AM No comments: