At Home with Westerland

At Home with Westerland

When Kordes introduced Westerland in 1969, this distinguished German rose hybridizer had achieved a new level of excellenze.

Westerland truly has everything people are looking for in roses: exemplary beauty, ample vigor, superb disease resistance, delicious fragrance, and an intriguing apricot color blended with cream, yellow and orange depending on the climate and time of year. It also has a long vase life.

To these general characteristics, let’s also add the California Central Coast criteria—the flowers always open, the petals drop-off when spent, and the plant is rarely without flowers.

I’ve only grown it now for a dozen seasons now so I’m a longtime friend. Others who have had it much longer are equally rapturous with the caveat that it does get “big.” I'd originally planted it in the front yard but there was too much shade so I moved it two years ago into a prime location on a backyard fence.

The breeding of Westerland is one of the most interesting in hybridizing history. In its ancestry, Westerland has R. foetida persica and R. eglanteria—the yellow Persian species which brought that color to modern roses and the wild European sweet briar rose which brought its excellent disease resistance to the table.

The hybrid perpetual General Jacqueminot (1853)—one of the first repeat-flowering crimson-colored roses; the hybrid teas Madama Butterfly (1918), Crimson Glory (1935), Golden Masterpiece (1954), Charlotte Armstrong (1940), and Peace (1945); several of the Pernetia roses including Souvenir de Claudius Pernet (the great French rose hybridizer Pernet (1920)—credited with bringing the color yellow into the hybrid tea class—named this influential hybrid for one of the two sons he lost in World War I.); and the hybrid musk roses Robin Hood (1927) and Eva (1933) through its floribunda parent, Circus (1956).

With such a mixed ancestry, Westerland is given the nondescript classification of “shrub.” Earlier in its history, it was considered a Climbing Floribunda.

Westerland has produced a yellow sport known as Autumn Sunset and an offspring—the relatively unknown but acclaimed, Jane Eyre.

My cuttings came from former MBRS president Ruth DeBord’s garden. I gave two to the raffle table, one to a friend, put one in the ground, and have one to spare. Even in the worst part of wet springs, I lost no leaves to black spot. Even in the heaviest July fog, it had no powdery mildew.
I presume that Westerland is named for the northern most city in Germany, a seaside resort town. The City of Westerland is located in the Frisian Islands in the North Sea, reachable by causeway, and approximately due west from the German border with Denmark. Given this connection with marine climates, is it any wonder this rose does so well on California’s moist coast?

Westerland, which bears a good rating of 8.3 in the ARS handbook of roses is carried by specialty nurseries and is also available from Weeks and Edmunds. Local nurseries do have access to ordering it so let your contact at your favorite nursery know.


Many benefits can be derived from roses which send out long canes looking for as much sunshine and support as they can find. These include providing a verticle element in the garden, filling spaces that shrub roses can't fit into, adding extra security along fences to keep out unwanted visitors, and being among the first roses to bloom in the springtime.

Unlike other plants which are called "climbing," roses do not produce tendrils, like grapes, which wrap themselves around what they cling to or, like ivy and trumpet vine, produce invasive growths which work their way right into tiny spaces on or between boards and the bark of trees. Both of the latter will overtime bust up fences.

Climbing species roses often have evolved hooked thorns which help them cling better to their support or to themselves in the wild. Garden climbers, however, all need their gardeners to tie them down or provide material they can weave themselves into and out of.

Pruning climbers can be a daunting chore but it's one I always look forward to as I can do it while standing up and when the garden bed is wet. The top of my fence which surrounds the back garden also gives me a guideline as to the ideal height and the cross boards easily support the horizontal canes. Pruning will help them rest and build up strength for a magnificent first of the season bloom.

Like pruning other roses, several principals remain the same. Remove all dead wood or damaged canes, snip off spindly growth especially lower down on the verticle canes, pull off and discard all of last year's leaves, and check to make certain your support is still tightly secured to the fence, arbor, trellis or archway. 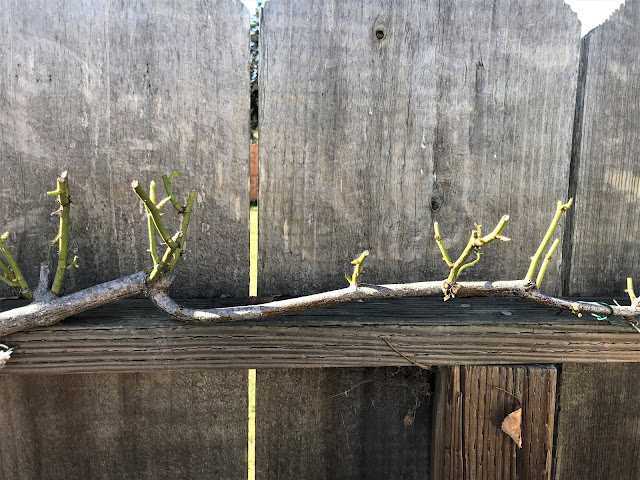 When pruning a climbing rose, leave stubs from last year's growth along horizontal canes. Flowering stalks will emerge from these growths and provide a profuse bloom.

While pruning, check the ground around your climbing roses. If they are grafted, you want to make sure that the bud union rests at the soil line and some light and warmth reaches it as that's where your new growth will come from.

I usually try to prune my largest climbers a little before winter's wind and rain. Here's the work I did on my noisette rose "Madame Alfred Carriere."

It may seem drastic but Madame Alfred Carriere is a vigorous noisette rose and will soon respond to the rest period and the lengthening days. My purpose in pruning is to keep the rose a manageable size and to maximize the flowers. Noisette roses bloom repeatedly throughout the year.