Here's a recent video of mine containing some early spring flowers captured in paintings by Catharina Klein. It's too high resolution for Blogger so follow this link: Early Spring Flowers.

And a sampling of her flower paintings depicting these first bloomers . . . 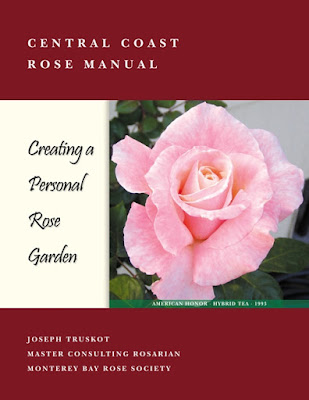 Since its publication in 2011, this book store has sold more than 40 copies of my Central Coast Rose Manual. I wish Diane and Gordon a happy retirement and hope that the new owners will continue this wonderful independent bookstore.

Here's the email I received yesterday.

With sad heart, wanting to let you know that River House Books will be closing by the end of April, when the lease is up, as Diane and Gordon are retiring.  The store is for sale, so hopefully there is a future for a bookstore continuing here in Carmel at some point.

Thank you for letting us sell your books.  We have enjoyed getting to meet so many of you.  Also, a reminder, if by chance you have unused Gift Certificates laying around, now is the time to redeem them.

Thank you for your patronage.

The time comes in every rose garden when that beautiful hybrid tea you've enjoyed for years starts slowing down, producing no new strong canes from the bud union (basal breaks), and looking more and more like a gnarly, bark-encrusted tree stump. The above photo shows Oldtimer which has been growing in that spot for more than 20 years. It once produced 7-inch blooms in abundance but has gradually declined with fewer flowers and no new strong canes.

The natural aging process in grafted roses is particularly hard. With each season, new canes are produced further and further out from the bud union. As the organic material in the soil decomposes, the soil compacts, and the rain and wind erode the dirt around the rose, the bud union - the spot of the original graft - becomes more and more exposed to the dry conditions which cause it to crust over. When the bud union sits too far above the soil line it becomes nearly impossible for the rose to break through the hard and dry wood with a new cane.

Those plants that continue to do well over the years have probably wandered off the rootstock and developed their own roots. Eventually, the rootstock becomes useless and, if its shoots are consistently removed, will die. The above photo shows Tiffany, planted in 1994, still producing canes from its bud union (on the left) but also having a cane that's developed its own roots (on the left). In order for a grafted rose to develop its own roots, the new canes must be touching moist soil.

So what do you do if the grafted roses are sitting high above the soil line and refuse to produce new canes?

Remember: if this rose was given to you by a special friend or was the rose that was growing in your late grandmother's garden, still plant a new one. Roses are reproduced asexually which means there is only one rose bush that is Double Delight, all plants are multiples of it. They are simply clones.

2. Look around the plant and see if any of the canes are touching the soil line. Now is a great time to remove this cane and pot it up. If it has a few fledgling roots already developed, all the better. Dust the root end with some planting hormones and grow a new plant. It will take two seasons for it to develop properly but it will solve the problem. A change in location with fresh soil may produce great results.

3. If it's a rose that is no longer in commerce or one that you never knew the name of, the best way to keep it flowering is to start a new plant. Make a cutting and get it started now. Warming days, periodic rain and increasing sunshine - all typical of spring weather - will put less stress on it and improve your chances of it "taking."

4. You can also scrape and saw the gnarly bud union until you reach some green wood. Then, mound up the exposed bud union with some cow manure and alfalfa pellets and let the sun shine directly on it. The bacteria and sunlight will increase the temperature. Make sure to keep it moist.

Others have recommended the addition of Epsom Salts (magnesium sulfate) and or Vitamin B1 to stimulate growth. With some luck, a new basal break will show itself. This is more likely to happen when the bush has other canes to provide energy.

When the rose sits far above the soil line, mounding up the soil might not be practical. You may consider improvising or investing in a plastic fence which will help keep the soil in place.

Remember that roses are part of the botanical family Rosaceae (named after them!) which also includes apples, plums, cherries, almonds and other trees. Older climbing roses do develop supporting canes which looks like bark-covered trees.