The American Rose Society gives it the name Gloire des Rosamanes which can be loosely translated from the French as "The Pride of Rose Maniacs." It has been around since 1825 where it was bred by Monsieur Plantier in Lyons using a remontant rose from China and a damask rose, although there may be some doubt to the pollen part.

Ragged Robin (or Red Robin) became very popular as it blooms in large flushes through out the season. What it lacks in form, it makes up for in vitality, color, and generosity of flowers. It's a perfect rose for a fence and will easily go to 8 feet by 8 feet. An annual winter pruning will keep it in check and allow you to thin it out. I've even pruned mine back midseason and responded with a springtime-like flowering.
Because of its China ancestry, it's one of the first roses to bloom in the spring with a massive display of crimson red petals resting on top of light green, somewhat pointed leaves. The flower stems are short and individual blooms last only two or three days. It cleans itself perfectly. Regular deadheading will keep in flowering all season long.

You may find Ragged Robin blooming in many old neighborhoods in California as it once was used as a rootstock.

My plant was rose rustled out of a yard on Van Buren Street in Monterey. It was easy to root and has been in my garden for well over 20 years. Unlike many old garden roses, it does not send out runners and stays right where it was planted. 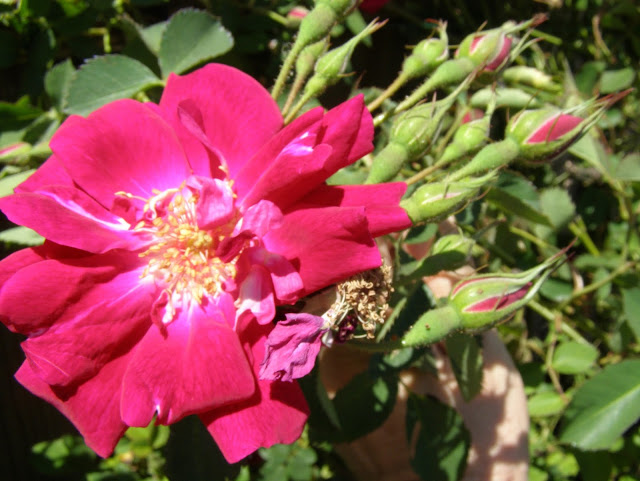