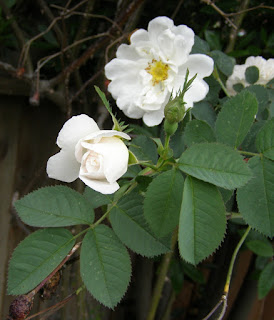 On a trip to my hometown in Ohio in May 2001, I saw a magnificent rose in full, fresh bloom. It was growing up the eastern side of an old farmhouse, a structure dating from the 1870s, perhaps a little later, but definitely a building that’s been around for more than 100 years.

The rose was Alba Semi-plena, an old garden rose first referred to in Gerard’s Herball of 1597 and probably the white rose that the House of York selected as its emblem during the Hundred Years War.

Rosa Alba Semi-plena may also be the same as Rosa x alba nivea and Rosa x alba suaveloens. Rose historians agree that all of the roses found in the Alba group are hybrids, whether naturally occurring or not. So the references which list their names as if they were species roses are not accurate.

Any rose known by several names is certain to be very old. Some references list Alba Semi-plena as a sport of Alba Maxima which is a fully double, often quartered version.

Other authors list it the other way around and noted English rosarian Graham Stuart Thomas even observed a five-petaled sport on an Alba Maxima.

The leaves of both are an attractive gray-green, sometimes appearing “bluish,” and very dentate on the edge of each leaflet. The calyx (sepals) extends well beyond the flower bud. Some even appear beyond the outer most petals in a fully open flower.
The road-facing front of the two-story farmhouse I visited was about sixteen feet wide and thirty feet from its hand-hewn sandstone foundation to its peak. This elegant rose covered most of the first floor and a considerable portion of the second. This is a serious plant.

It appeared that the tenants of the house hadn’t bothered much about tending the property other than mowing the lawn. This was fortunate for a rose bush which thrives on neglect. I enjoyed viewing its flower covered canes with the backdrop of dense gray-green foliage.

The outer edge of the white petals on an individual flower curve upward and slightly inward forming a saucer-like shape with a thicket of bright yellow anthers in the center. 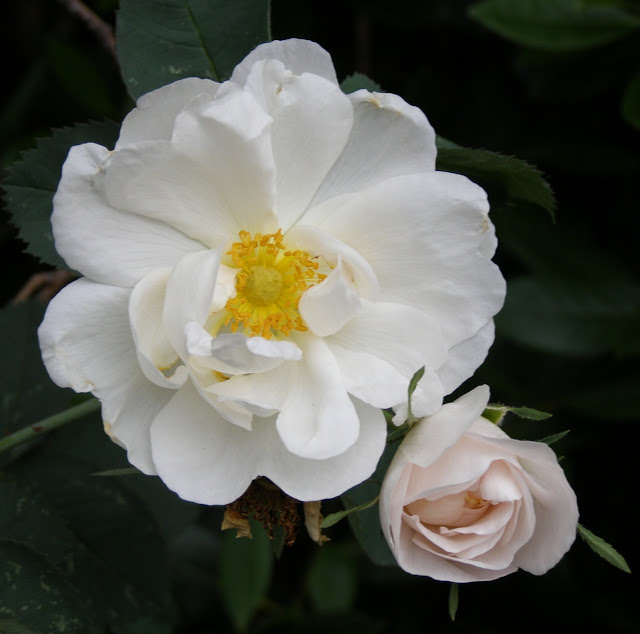 On the day of my visit, it was raining and I was trespassing and I was supposed to be doing something needed by others at a place far from where I was. Such were my family visits. I vowed to return to get a cutting before leaving Ohio.

A few days later, my sister took me to Columbus, Ohio’s famous Park of Roses. Columbus, I learned, had been the seat of the American Rose Society before it moved its national headquarters to Shreveport, Louisiana.

The Park of Roses was being primped up for Columbus’ Annual Rose Festival and the local society’s Rose Show which was to take place in two days. We toured the beautifully laid out and well-tended garden. It was still early for the first full flush of hybrid teas as Ohio had had unseasonably cool weather for the past three weeks.

I was particularly pleased to see two beds of roses developed by Gerry Twomey in Watsonville in the early 1990s: Eternity and American Glory. There may have been more but my time was limited and my vacation schedule packed with other things to do.

When we got to the Heritage Rose Garden at the far end of the park, my eyes were drawn to a white semi-double old garden rose. This, too, turned out to be as the labeled indicated, Alba Semi-plena. It was unmistakably the same rose I had seen at the farmhouse. What simple beauty!

Its semi-double blossoms are about 3-3½ inches in diameter and sport one of the loveliest fragrances in rosedom. Alba Semi-plena is grown widely in Bulgaria’s Valley of the Roses where it has been used to make perfume.

In another reference, Graham Stuart Thomas notes that the Bulgarian growers seem to prefer the old damask rose, Kazanlik (1689), for perfume extraction, but Alba Semi-plena is used as a hedge around the growing fields.

The blooming period of Alba Semi-plena is perhaps about a month which is standard for many of the old garden roses. In our climate, I wouldn’t be too surprised if it produces an occasional bloom in the fall.

The hips of Alba Semi-plena, are a bright red, prickle-covered oval about ¾” long and garner renewed interest in the shrub later in the season. I look forward to seeing them every fall.

The entire Alba group of roses are very hardy, somewhat shade tolerant, fragrant, and limited to a narrow color range of white, blush, and pink.

Most are tough plants which thrive with little care and resist most diseases. They make great bushes for the back of garden beds. When they are in bloom they attract attention. When they are finished blooming they compliment the roses planted in front of them. They make a particularly good choice for a north facing fence or wall where most other roses just won’t prosper.

Upon my return from that trip, I sent off for starter plant and it’s been growing beside a bay laurel in the back corner of my garden ever since.

The Alba roses which I have grown include Great Maiden’s  Blush (1550) which has beautifully quartered,  light pink, three-inch blooms on a disease-free bush (Its name in French is Cuisse de Nymphe Emué, or Nymph’s Blushing Thigh!); Madame Legras de Saint-Germaine (1846) which has 1½ - 2½ inch pure-white flowers and only an occasional thorn; and Félicité Parmentier (1834) which has light pink inner petals and creamy white outer ones and is endowed with one of the strongest true roses fragrances in gardendom.

Two Albas I hope to acquire soon are Königin von Dänemark (1826) which is a medium-pink color and quite healthy; and Cymbaefolia (1807), one of the many curiosities in rosedom. It is also known as the hemp-leafed Alba. Its leaves are long and distorted and resemble cannabis. Its flowers are smallish and ivory white.

A few of the authors I read regarding the Alba Semi-plena commented on the plant’s ability to root easily. They also noted that for a period of years it had been used as a rootstock which may account for its presence at the rural northern Ohio farmstead.

I never made it back to the house at the crossroads in 2001. Instead, I cut down and dug out two poorly performing fruit trees, removed the sod, and built a new rose garden for my mother who was celebrating her 80th birthday. She enjoyed the new garden bed until she passed away 2010. 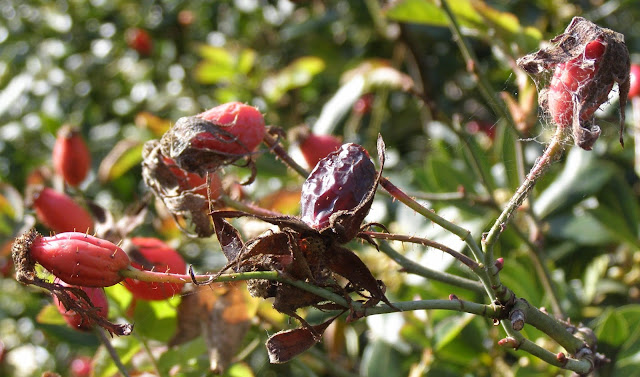