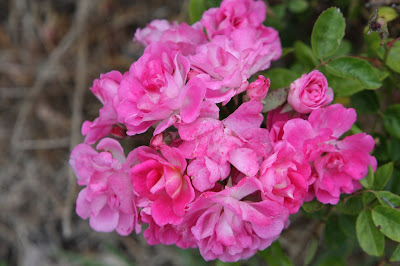 A photograph in the crude colors of 1940-era garden books struck me right off. A happy little cottage surrounded by a white picket fence edged by multiple plantings of a new rose at that time called China Doll.

Its clusters of bright, medium pink flowers create one of the nicest landscape effects ever. It makes a wonderful low hedge. I bought 23 bare root ones in 1993 – every one I could find - and planted them as a border for my back garden rose bed.

After 25 years of marginal care and major abuse, only 8 have survived, most succumbing to being stepped on by me as I tried to get the hose over the hedge to tend the roses behind them or during various droughts when the shallow roots just didn’t get enough water.

It’s still the single most numerous rose, by far, in my yard. It’s never taller or wider than two feet. It needs just a little food and water to produce many, many blooms.

China Doll’s individual flowers are medium pink often with a white eye or white stripe near the center or along a petal edge. I have had clusters bearing up to forty different two-inch wide blooms at the end of a single stem. The flowers within a cluster open approximately at the same time so a cluster’s presentation never has too few open flowers and too numerous buds. The clusters are long-lived and attractive. It has a slight fragrance in full sun. It’s rarely out of bloom.

My China Dolls are grafted and therefore not invasive.

One spray has won the best polyantha ribbon in several Monterey Bay Rose Society shows. It contributes greatly to any garden which contains it and comes highly recommended by me. 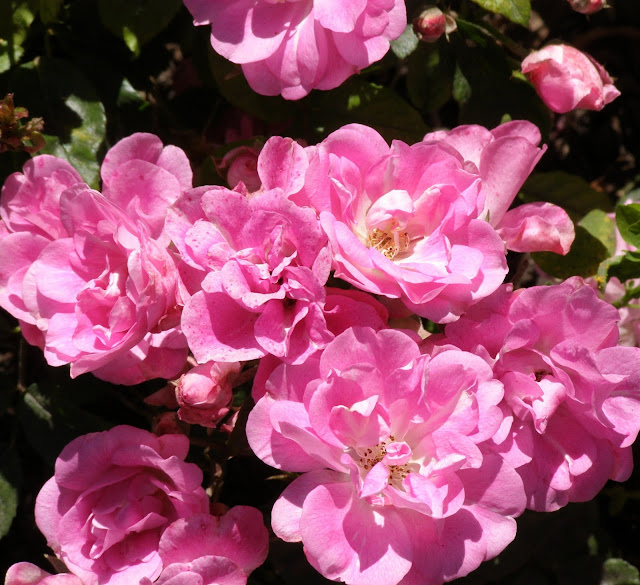 China Doll was bred in 1946 in the United States by Dr. Walter Lammerts. A towering giant among American rose hybridizers, Dr. Lammerts of Livermore, California, developed the following long list of excellent roses: Bewitched, Charlotte Armstrong, Chrysler Imperial, Golden Showers, High Noon, Mirandy, Queen Elizabeth, and Sunny June. They were all created in the 40's and 50's and are still available widely which says so much about their quality.

Polyantha roses are descended from rosa multiflora and rosa roulettii. Early records are quite sketchy and dubious, but there was a market at the turn of the last century for roses which produced clusters of smaller flowers and repeated their bloom during the season.

Mrs. Dudley Fulton, a white or near white polyantha, is the seed parent of China Doll. She was bred from Perle d’Or — still one of the most popular polyantha roses, especially around California’s Central Coast where it is particularly well suited. Perle d’Or was bred in 1884 in France and is a peachy cream cousin of Mlle. Cécile Brunner. China Doll’s other grandparent on this side is a now rare orange pink polyantha bred in 1921 in England called Dorothy Howarth.

Tom Thumb, the famous 1936 miniature rose bred by De Vink in Holland where it is known as Peon was the pollen parent of China Doll. Tom Thumb’s parents are rosa roulettii and Gloria Mundi, a nearly forgotten, orange-red polyantha introduced in 1927 by De Ruiter again in Holland. It had been discovered as a sport of a dark red miniature of unknown parentage named Superb. It’s most famous offspring is a similarly colored rose named Pinkie which was developed by Swim in 1946. Pinkie’s elegant form is quite different.

China Doll is susceptible to powdery mildew especially evident on stem and peduncle during our foggiest summers, to black spot because of its compact growth, and to die back along a cut main stem.

I have wished that I could tend mine better. They are reachable enough but grow on a slight slope so watering and feeding them proved difficult - faulty garden design for California.

Also on the negative side, I’ve had beautiful cut specimens last only a matter of hours in a vase. China Doll does not rank at all as a suitable cut flower though it looks terrific combined with complimentary colored hybrid tea roses at least for a few hours.

I’m not sure how Dr. Lamnerts came upon the name China Doll, but its path of origin via France, Holland, England, and America ultimately puts one in China and as a rose, it is a doll! 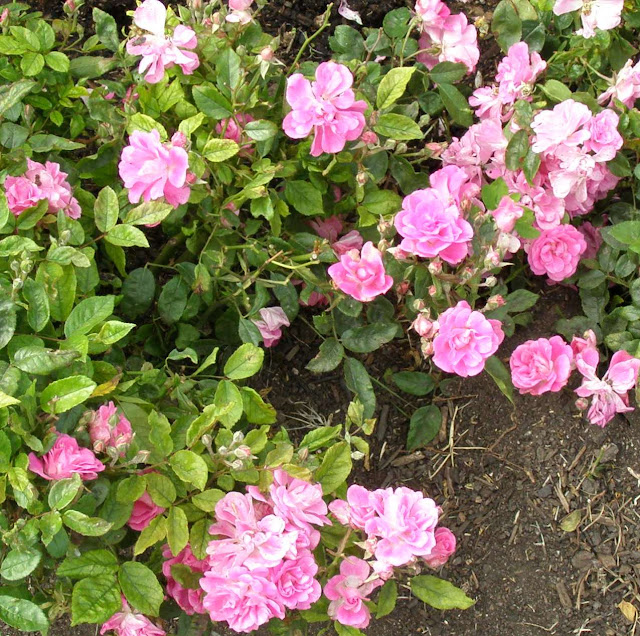